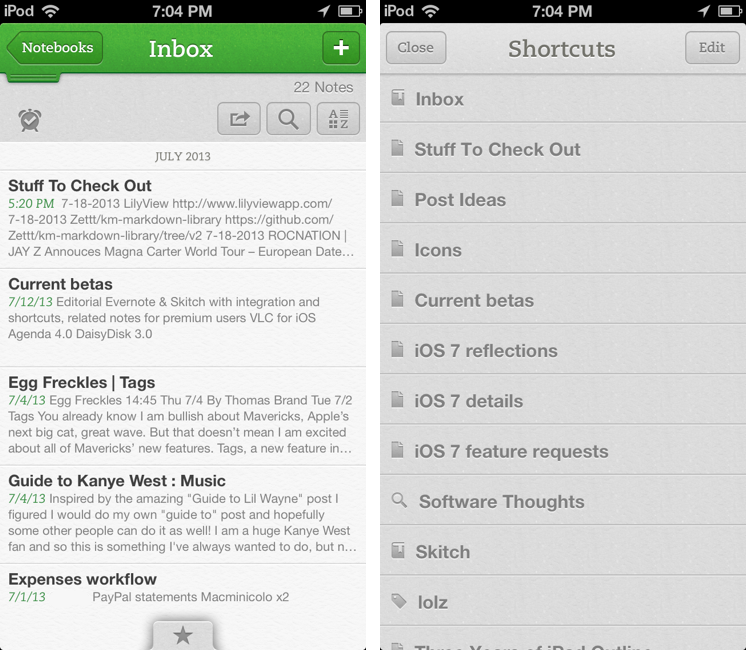 Inter-app communication with Skitch works like Evernote for Mac, but it’s even more impressive considering Evernote’s limitations on iOS with sandboxing and app switching. With the latest Skitch installed on an iOS device, notes that contain inline images will show a Skitch button in the toolbar of the image viewer (that you can access by tapping on an image). When tapping the Skitch button, Evernote will offer two choices: “Edit image in Skitch” and “Create a new Skitch note”. In both cases, Evernote will take you to Skitch, which will automatically bring up the image and its usual set of editing tools for visual markup; when you’re done editing in Skitch, a “Save to Evernote” button will take you back to Evernote, syncing changes to the service’s cloud. 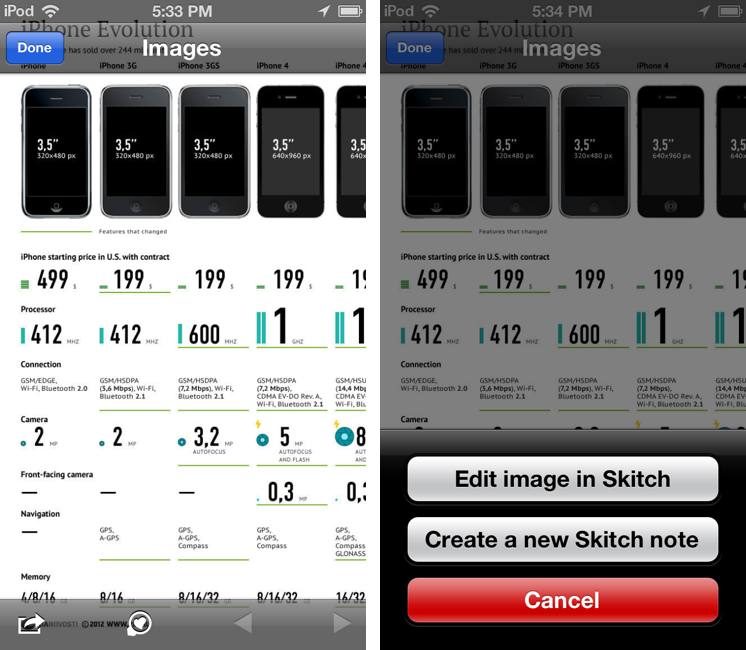 What’s impressive is that, like on the Mac, if you choose to edit an image inside a note and then go back to Evernote, the image will be updated inline within the note, without creating a copy. This sort of seamless inter-app communication shows that it’s possible for some developers to achieve the same degree of interoperability of third-party OS X software between iOS apps.

For Premium users, Evernote added support for annotating PDFs in Skitch – a feature that was first introduced in Skitch 2.5 for iOS. Skitch can annotate PDF attachments contained in Evernote notes or generate a PDF out of a note that contains text and images; to annotate a PDF in Skitch, Evernote added a Skitch button to the main toolbar of the Evernote note editor.

A great addition in Evernote 5.4 is integration with Shortcuts. On the Mac, Evernote allows you to create shortcuts for individual notes, notebooks, tags, and even saved searches. I use shortcuts on a daily basis to quickly navigate between notebooks and open notes that I edit often. In version 5.4, not only do the shortcuts that you added on the Mac sync back to iOS, but you can also create new ones on iOS and have changes synced back to Evernote for Mac automatically.

On the iPad, shortcuts are available in a sidebar similar to the one Evernote used for Reminders, whereas on the iPhone they added a new star button at the bottom of the note list that you can tap to view all shortcuts. You can delete and re-arrange shortcuts vertically, and tap on them to open notes, tags, notebooks, or saved searches. Animations are quite smooth on the iPhone 5, but a bit slower on the iPad mini and 5th-gen iPod touch. I like that Evernote added new buttons to the swipeable menu in the notes list, as I wished they would when they launched Reminders. 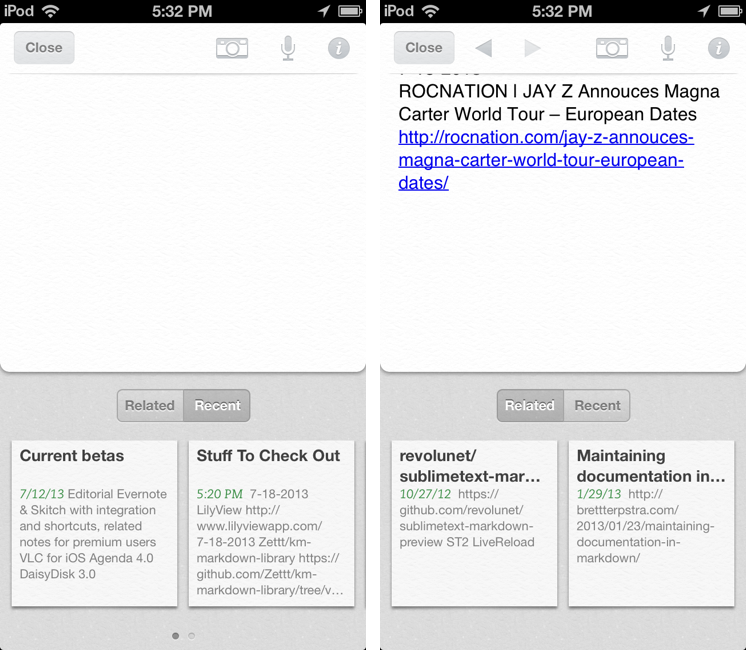 The last big new feature of Evernote 5.4 is access to Related notes (for Premium users) and Recent notes. They are available as thumbnails under a set of two tabs at the bottom of the note editor, and I’m a big fan of Recent notes as they provide a nice way to quickly move between multiple notes – useful if you want to multitask with Evernote as you’d do on the Mac.

I like how Evernote is listening to feedback and constantly improving its iOS app with features that make it just as powerful as the Mac counterpart. Evernote 5.4 is available on the App Store.