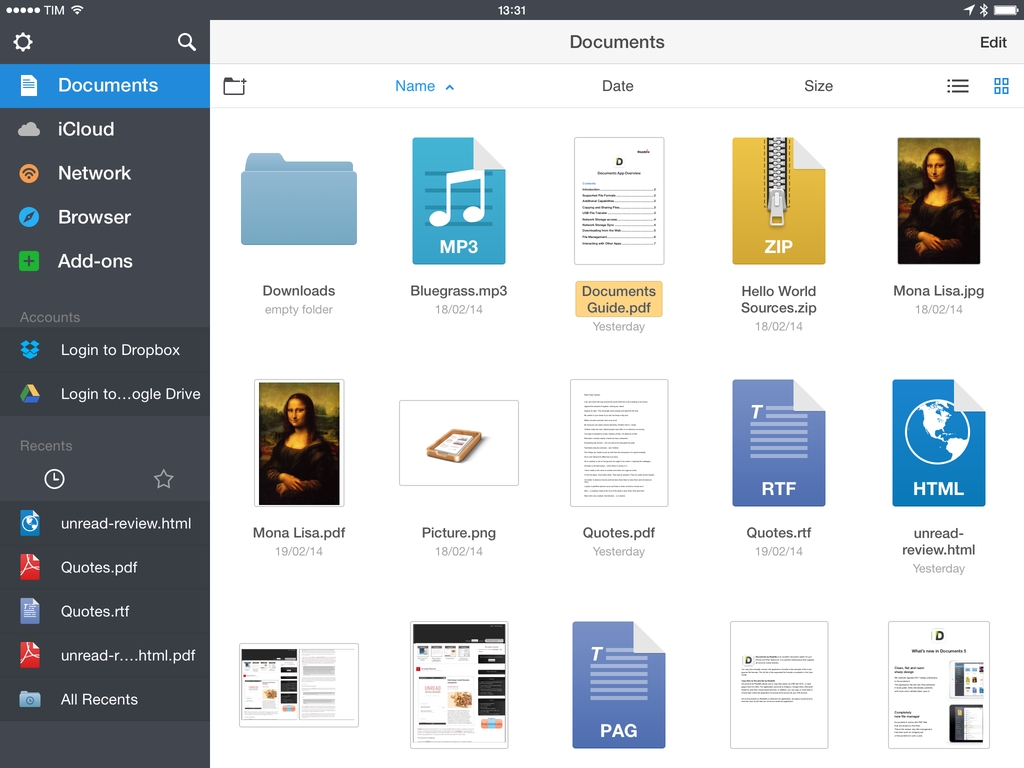 With Documents 5, released today on the App Store as a free update, Readdle is seeking to build its own ecosystem of interconnected apps on iOS. By leveraging inter-app communication features currently available on iOS but mostly ignored by Apple’s apps, Readdle is turning Documents into a centralized location for files, which can be sent to other Readdle apps and modified without creating duplicate entries.

On the surface, the new Documents 5 is an iOS 7-focused update that brings a refreshed interface and new file management options inspired by PDF Expert 5. Toolbars and icons are clean and sharp, support for drag & drop has been enhanced to create favorites and folders, and an improved sidebar makes it easy to navigate through files and labels (which, as with PDF Expert 5, aren’t compatible with Mavericks tags). The underlying feature set of Documents is unchanged: you’re essentially looking at PDF Expert 5’s design principles and features brought over to Documents, including background downloads and SMB support. Documents still has a built-in web browser, it can manage files inside folders, play media, and it can open a variety of file formats.

The big addition of Documents 5 is what Readdle calls “Add-ons”, which is a way to use other Readdle apps as features within Documents. Currently available only in the iPad version of the app, add-ons enable Documents to edit and annotate PDFs, print documents and webpages, and convert files to PDF – if they sound familiar, it’s because these features come from PDF Expert 5, Printer Pro, and PDF Converter, Readdle’s more specialized apps for iOS. The implementation of apps as features inside Documents varies slightly from app to app, but the basic idea is that Documents is now a file hub capable of performing actions on files while minimizing (or avoiding entirely) the creation of duplicates.

Traditionally, Documents users were able to rely on the Open In menu to take a file and send it to another app to modify it. The problem with the Open In Menu, as I’ve argued in the past, is that it creates multiple instances of the same file as it is transported across applications – a limitation of the iOS sandboxing model that Apple hasn’t touched in years. While the Open In menu is still available in Documents 5, it is being supplanted by Add-ons when it comes to features available in Readdle’s apps: open an HTML or RTF file in Documents 5 while you have PDF Converter installed, and the app’s sharing menu will display a new “Convert to PDF” button. By tapping that button, Documents 5 will send the document to PDF Converter, which will come up, convert the file, and feed it back to Documents 5 without creating a copy in its own library; you’ll end up with a PDF file displayed in Documents within a couple of seconds, because the app effectively treated PDF Converter as an external feature. 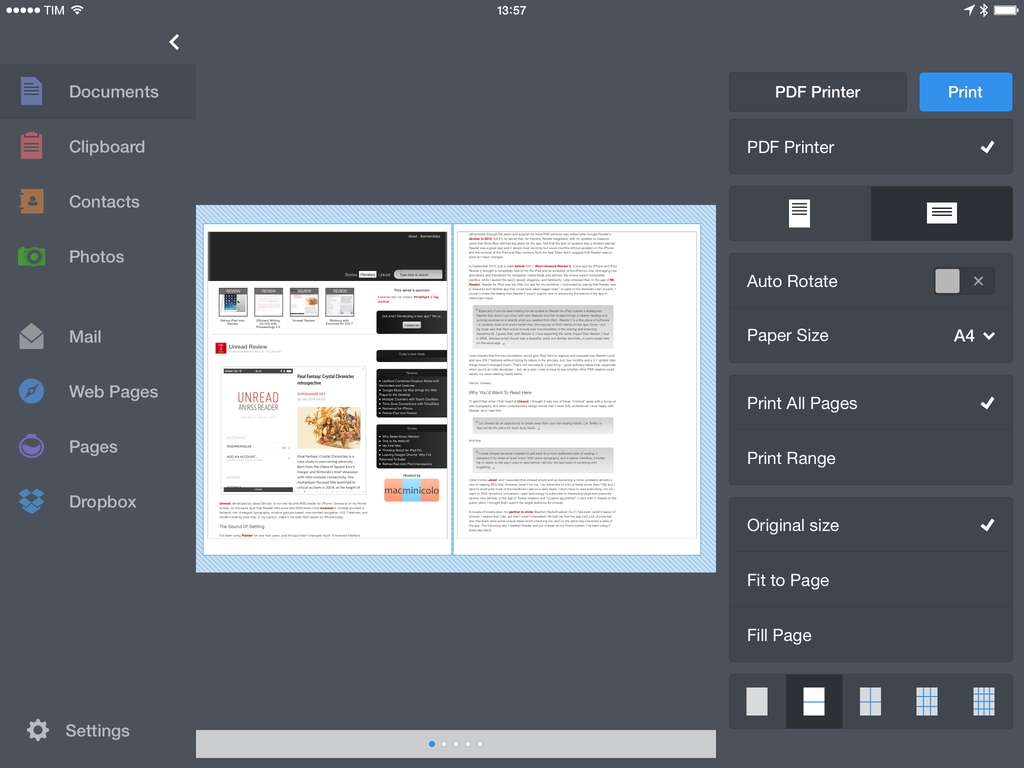 The same goes for printing documents and editing PDF files, albeit with different technical implementations. If you have Readdle’s Printer Pro installed and you wish to print out a document, Printer Pro will take over Documents’ Print menu (which by default uses Apple’s standard AirPrint popover) and the current document will be sent to Printer Pro, which will launch in Print mode. For PDF Expert, Readdle eschewed the external app integration approach and instead built PDF Expert’s engine into Documents 5: if you have PDF Expert installed on your iPad and you want to edit a PDF inside Documents, the app will unlock PDF Expert’s toolbars and editing features (even Review mode) without forcing you to switch between apps.

The idea of a glorified Open In menu with editing and saving capabilities that span multiple apps isn’t completely novel: in February 2013, Good.iWare launched the GoodReader SDK, which allows developers to send files and folders to GoodReader, let users modify them inside GoodReader, and send back edited versions to the original “calling” app. The GoodReader SDK, however, has failed to gain traction among third-party developers, and Readdle’s new ecosystem of apps feels like another first attempt at enhancing Apple’s Open In model within the current limitations of iOS.

On The Prompt, I’ve argued that thinking of apps as features rather than individual silos may be a way to reimagine inter-app communication on iOS. Documents 5’s add-ons are reminiscent of that idea, but they’re still limited by how iOS is designed: for Printer Pro and PDF Converter, you’ll still see iOS switching between apps – a process that, while automated by Readdle, isn’t the most elegant solution. Readdle’s decision to incorporate PDF Expert into Documents 5, on the other hand, is more interesting – PDF Expert truly becomes a feature in Documents – but perhaps unfeasible on a larger scale (imagine trying to include feature sets from dozens of apps into Documents).

Readdle’s new add-ons feature is still limited by iOS (case in point: an add-on can’t work with multiple files at once, a limitation that comes from the Open In menu), but it has potential and it makes converting, editing, and printing PDFs easier in Documents today. Add-ons aren’t available for the iPhone yet, and Readdle plans to add support for Scanner Pro in the next few weeks.

Until (and unless) Apple introduces new inter-app communication features for iOS, it only makes sense to imagine a Readdle SDK for iOS developers: to make Documents a truly centralized file management app, Readdle could allow any iOS developer to add file editing features to an app; it’ll be interesting to see if Readdle will consider expanding add-ons to third-party developers in the future.

Documents 5 is available on the App Store.