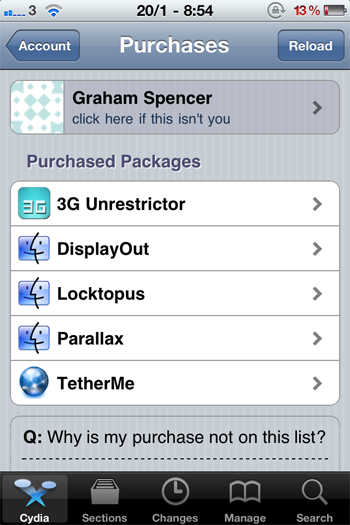 Cydia, the App Store equivalent for all those jailbreak required apps that Apple has or would deny, has just received a handy new feature that allows you to view in one place all the packages that you have purchased from the Cydia store.

Jay Freeman, creator of Cydia has been working hard in recent months to improving Cydia in many ways from decreasing the all to common “Reloading” times, improving the polish and adding new features. This new feature has been a fairly common suggestion not only for Cydia but the App Store too, which whilst present in the Mac App Store has yet to reach iOS App Store - something which those of us at Macstories are hopeful Apple will add in the near future.

This latest feature can be accessed from Cydia’s main screen under “Manage Account” and then “Installable Purchases” once you login to the Google or Facebook account that your purchases are associated with. Freeman clearly plans in the future for even more account management options noting “I’m anticipating having more stuff here” message. I for one would love the ability to favorite packages that you install so that after every restore you could just get a 1 click queue and instantly install them all.

There are a few things Freeman notes in the “Installable Purchases” page, notably: