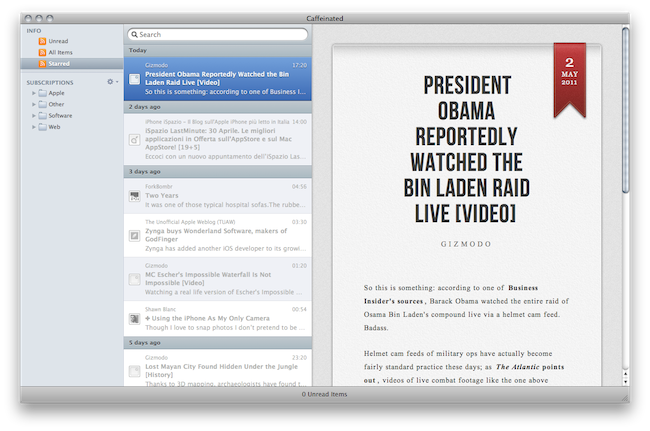 Back in December 2009, I was browsing Ember looking for some cool new apps to cover on MacStories. As I browsed the online gallery to find interesting projects worth a mention on the site, I stumbled upon the first screenshots of a new RSS reader for Mac, Caffeinated. The app looked elegant and super-slick, and as you may remember from my initial coverage of the private alpha version, it was also a fast way to access Google Reader from the desktop. But since then, the app disappeared from our radars and lots of things changed in RSS app landscape: Reeder for Mac was released as beta, Google Reader clients for iOS started proliferating implementing features that weren’t previously possible on the desktop. Caffeinated, however, wasn’t dead at all: it was being rebuilt from the ground up, and that was a long process looking back at my first article. As promised by the developer a few weeks ago, a first beta of Caffeinated is finally available today.

From a design perspective, not much has changed since my initial coverage. The app still looks as slick as ever with minimal sidebars and iOS-like scrolling and cells, but it’s the underlying engine that went under a massive re-construction. The app is way faster than I remembered, perhaps not as fast as the current Reeder for Mac beta but definitely snappy and promising. The app takes less than a second to start up with a neat opening animation, subscriptions can be manually refreshed with a keyboard shortcut but there’s no way to set automatic reload times yet. In fact, this first beta of Caffeinated is so limited there’s no access to the Preferences yet, and sharing options haven’t been implemented. As the developer writes:

Caffeinated was built for speed and customisability. The app is theme-able, the API exists but I have yet to write documentation or build in appropriate preferences, if you are interested in themeing with this beta, just give me a shout and I can walk you through it – its really not that difficult.

This is mainly a usable taster of what is to come…so be patient ( I know you have already! ) but it will be worth the wait in the end.

Overall, this first beta of Caffeinated – quite possibly one of the most anticipated Mac apps of 2010, before some users lost hope and began to think the project went the way of the dodo – is pretty buggy and clearly unfinished, but it’s a sign of interesting things to come in the (hopefully) near future. If you want to take Caffeinated for a spin, go download beta 1 here.