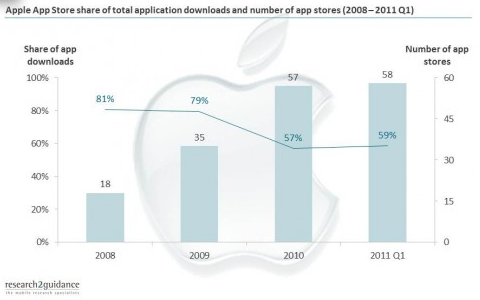 Research2Guidance issued a new research report recently that indicates Apple is dominating other mobile app stores in terms of app downloads. In the first quarter of 2011 it is revealed that Apple’s App Store was host to 59% of all application downloads. This is despite a fall in 22% since the App Store first opened to a dominating position of serving 81% of all app downloads.

The report surveyed 58 app stores which is a significant increase from the 18 app stores that were available when the iPhone App Store launched in July of 2008. Unsurprisingly the Android Market is the strongest competitor to the App Store. It led to a deterioration of the App Store’s share of downloads in the second half of 2010, which fell by 24%.

The first quarter of 2011 has seen a stabilization of the App Store’s share of app downloads, which has actually increased by 2% - helped by the increased popularity of the iPad. Research2Guidance says in its report that the following two years will prove critical for Apple’s competitors if they want to reduce their hold over the market. In part this is solidified by the suggestion that once users spend significant amounts of money on apps, they are less likely to want to switch platforms.

[Research2Guidance via The Next Web]