Ahead of the App Store’s fifth anniversary on Wednesday, July 10, Apple has launched a new promotion that includes five “groundbreaking” iOS apps and five “landmark” iOS games; these apps will be available for free for a limited time to celebrate the first five years of App Store. Apple has posted an official page with links to download the apps and games on iTunes.

From the 500 apps available at launch in 2008 to the more than 900,000 at your fingertips today, it’s been a remarkably prolific five years for the App Store. To celebrate, we’re giving everyone five landmark games and five groundbreaking apps for a limited time. Plus, look back at the key moments that have made the App Store the world’s most innovative destination for apps.

The apps and games picked by Apple include Day One (a journaling application with an OS X counterpart that was named “Mac App of the Year” in 2012), award-winning game Badland, Infinity Blade II, Superbrothers: Sword and Sworcery EP, Over, and Traktor DJ.

Here’s the full list, with price comparisons before and after the promotion:

This isn’t the first time Apple has launched a promotion for third-party apps on the App Store. Every week, Apple picks an iOS app and makes it free for seven days as part of their “App of the Week” initiative; free apps are promoted on the App Store’s homepage, shared by Apple’s official Twitter and Facebook accounts, and are similar to iTunes’ “Single of the Week” music promo. Back in January, Apple worked with several third-party developers to launch a three-week “Get Stuff Done” productivity sale on the Mac App Store, which saw a variety of Mac apps discounted for a week. We wrote:

It’s easy to imagine how, in the future, if this will also be extended to the iOS App Store, developers will look forward to being included in Apple’s official promotions. Developers will get the exposure of the front page, the benefits of built-in social sharing on the App Store, and, possibly, a tweet from the @AppStore account — which has been posting links to apps on a daily basis. Apple is mixing the editorial aspect of the App Store (only apps “chosen by Apple” — therefore synonym of “quality” — end up in a section) with the universal appeal of discounts to generate word of mouth, sales, more variegate charts, and, ultimately, a nice 30% cut for the company.

Similarly to what they did for iTunes’ tenth anniversary, Apple has also launched a commemorative page and timeline for five years of App Store. The page includes key facts, dates, and details on the App Store’s launch and evolution throughout the years; last week, Apple sent a poster to selected members of the press detailing app download numbers, notable app releases, and billions of dollars paid to developers since 2008. 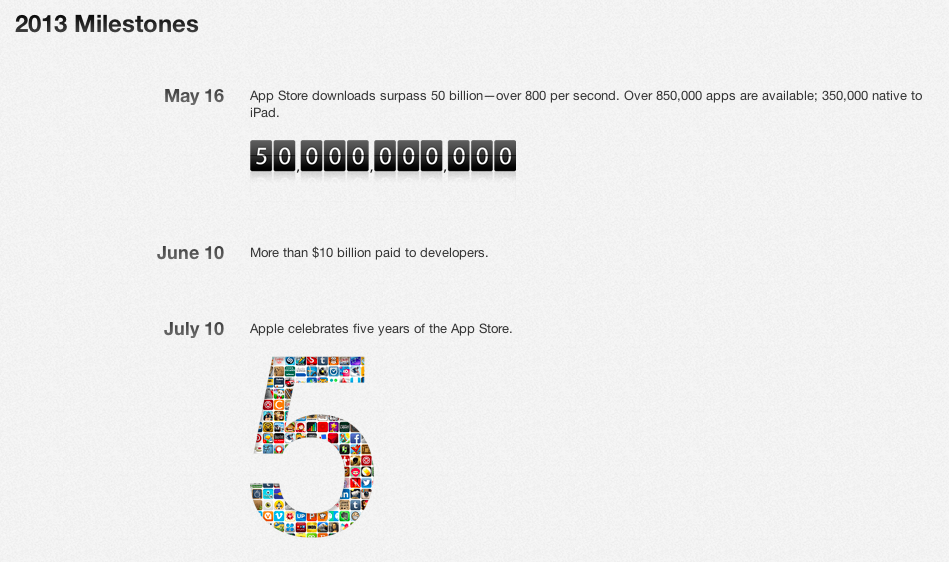