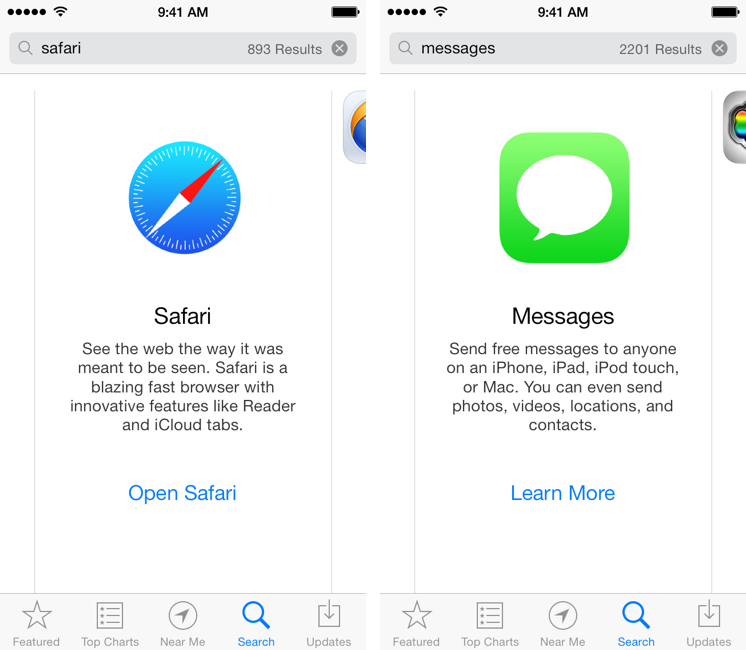 This morning, I noticed a tweet by Lukas Burgstaller with a screenshot of Apple’s Safari browser showing up in App Store search results for the “browser” search query. I did some tests, and I’ve discovered other search results advertising built-in iOS system apps and features with banners and links to open an app or read more information about it. I’m not sure when Apple started displaying their own built-in apps in the App Store search results, but it’s an interesting (and, I believe, good) idea worth discussing.

If you search for common terms like “web”, “SMS”, or “movies” in the iOS 7 App Store you’ll see special search results for Apple apps like Safari, Messages, and iTunes with a large icon, a description, and a link to learn more or open an app (such as Safari). These results appear on the App Store for iOS 7 devices (I wasn’t able to display them on a Mac using iTunes) and, in my tests, they also worked for queries like “browser”, “messages”, “cloud”, “internet”, “Siri”, and “text”. I’ve tried several other queries, but I couldn’t see results for other apps like Reminders, Calendars, Mail, Photos, Music, or Notes. 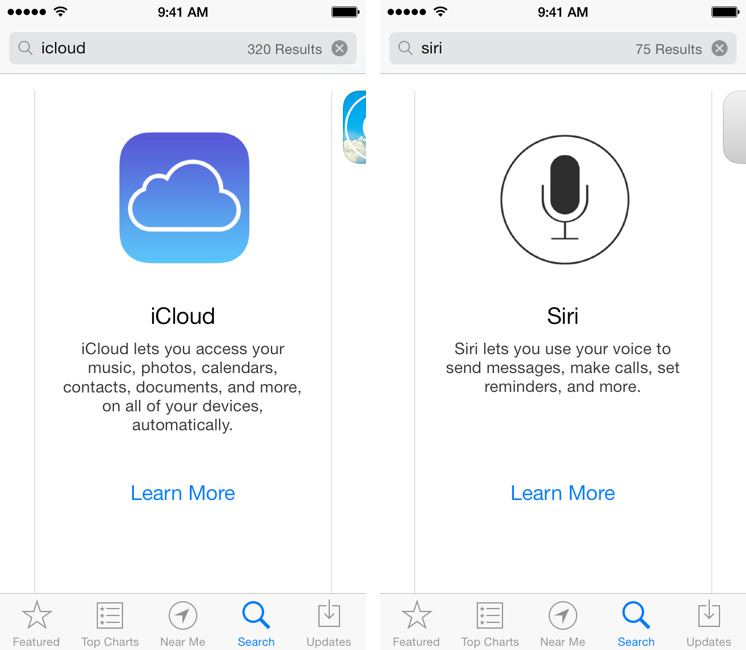 Apple isn’t new to injecting special results into the App Store search. Last year, following controversy (and an official apology) over the launch of Maps for iOS 6, Apple created a result for the “maps” search query that pointed iOS users to a collection of alternative maps apps made by other companies (the result is still available today). In this case, however, Apple isn’t showing special results for other apps, but they are telling customers how to find or read more about iOS apps and features that they have likely heard about before getting an iPhone or iPad.

It makes sense for the company to have another way of telling users that iCloud is a built-in feature and not an app, or that Safari is “the app to browse the Internet” that they already have. While Apple has made enhancements to iOS’ initial setup process in the past few years, there are always less tech-savvy users who assume that every app is on the App Store, that “the cloud” needs to be downloaded on a device, or that Siri is a utility they don’t have on their iPhone or iPad. With these results, Apple is either linking back to a native app or a webpage; for iCloud and Messages, they’re pointing customers to product and setup pages.

I imagine that there will be concerns among the third-party developer community over Apple tweaking search results for their own apps and services: what if Apple starts doing this for other, more specific queries that can (further) damage the relevancy of third-party apps in search results? Will Apple roll out additional results for apps like Photos, Calendar, and Reminders? For now, I think that this is just another way to reach out at the millions of iOS customers who think that everything is an app that comes from the App Store.

The App Store could be improved, and I think that this is a nice way to let new users find out and learn more about iOS apps and features in case they assume they should look for them on the App Store. Clearly Apple has seen that some of their customers make this assumption, and they’ve used the App Store’s card-based layout to give more relevance to core apps and services that are essential to the iOS experience.