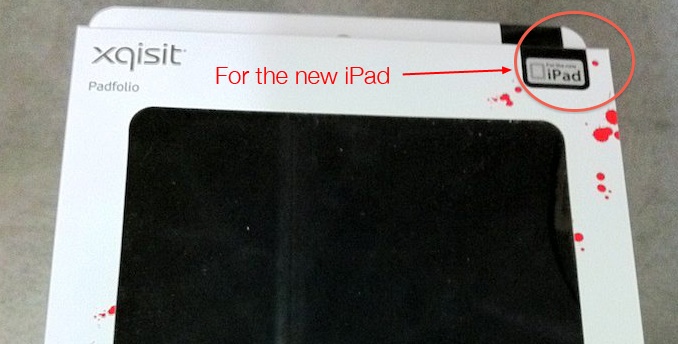 As noted by Apple Bitch, a new leather case for the next-generation iPad leaked to German website Macerkopf.de (Google Translation) confirms a series of rumors we’ve been hearing about the device like tapered edges, thinner design, rear-facing camera and flat back, but also provides some details on the actual name of the ‘iPad 2’. The term ‘iPad 2’ was indeed created by journalists and bloggers to indicate the second iteration of the tablet likely to ship in April; the retail packaging of this new case, however, comes with a simple “For the new iPad” label that may or may not suggest the ‘iPad 2’ will actually be called…iPad.

Of course, we can’t confirm on the authenticity of this leather case – which was allegedly leaked from a Swiss dealer that received more than 100 of these cases. The accessory also puts a lot of attention on the larger speaker cutout, supposedly implemented to let the new iPad achieve a much higher volume output comparable to Apple’s MacBooks.

Check out more pictures of this new case here. Another case surfaced on the internet last week reaffirmed other iPad 2 rumors such as smaller design, cameras and tapered edges.

Update: it also needs to be noted that current iPhone 4 accessories don’t come with labels like “Made for the iPhone 4”. Instead, Apple went for a simple “Made for iPhone” that doesn’t point to the “iPhone 4” name in any way. Still, we think ‘iPad 2’ isn’t really a great product name at all - especially considering Apple hasn’t named a product “x 2” since the Apple II and the iPhone is the only product that has gotten some kind of a numeric update on each generation.

On a personal note, I remember reading on videogame magazines a few years back that Microsoft didn’t choose to name the second-generation Xbox ‘Xbox 2’ to avoid the sound of an “inferior product” against Sony’s PlayStation 3. And so Microsoft went for the Xbox 360 brand that would play nice with PS3. Following this theory, Apple might not want to call the second-gen iPad ‘iPad 2’ to avoid confusion and confrontation with the iPhone 4, or even iPhone 5.