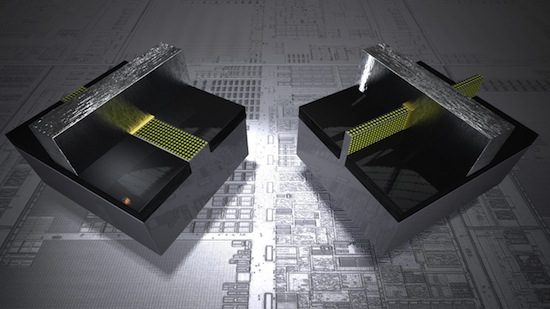 Earlier today Intel officially unveiled the technology that will power its next-generation of chips, codenamed “Ivy Bridge”, with production set to start for PCs and servers by the end of 2011. After a decade-long research in Intel’s labs, the company announced a new 3D transistor structure named “Tri-Gate” that will allow to boost performances and efficiency in the new chips that Intel will also make for mobile devices and tablets. This announcement comes after speculation earlier this week about Intel willing to consider making processors for Apple’s iOS devices – which currently feature CPUs manufactured by Samsung, a company that’s at war with Apple over several patent infringement claims as previously reported. Intel hasn’t disclosed any plan to make chips for Apple nor did Apple comment on any of these rumors, but the mobile versions of Ivy bridge featuring 3D transistors for optimized speeds and battery life could surely be an option for Apple in future devices.

Intel’s 3-D Tri-Gate transistors enable chips to operate at lower voltage with lower leakage, providing an unprecedented combination of improved performance and energy efficiency compared to previous state-of-the-art transistors. The capabilities give chip designers the flexibility to choose transistors targeted for low power or high performance, depending on the application.

The 22nm 3-D Tri-Gate transistors provide up to 37 percent performance increase at low voltage versus Intel’s 32nm planar transistors. This incredible gain means that they are ideal for use in small handheld devices, which operate using less energy to “switch” back and forth. Alternatively, the new transistors consume less than half the power when at the same performance as 2-D planar transistors on 32nm chips.

Intel’s first 22nm Ivy Bridge microprocessor was demoed today running on a server, laptop and desktop computer. Production is slated by the end of the year, with Intel likely demonstrating the power of the Ivy Bridge platform with more demoes over the next months.