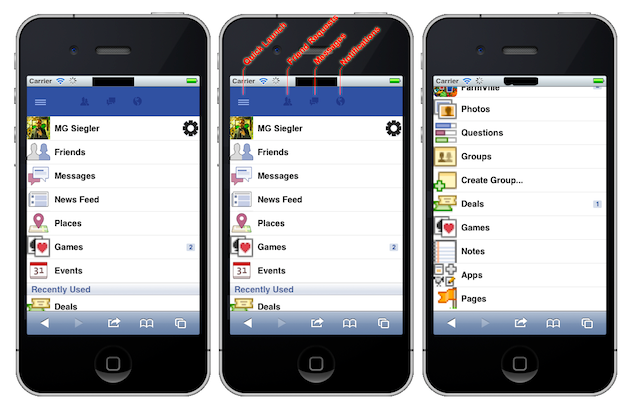 Last week, Facebook’s Mark Zuckerberg revealed the company was preparing for an “awesome” launch this week. A formal announcement is expected today at a media event at Facebook HQ, but several blogs in the past few days have claimed Facebook is set unveil a partnership with communication giant Skype (recently acquired by Microsoft) to bring video chats to the social network, an interesting possibility at the light of Google’s new Plus foray into the social sphere, which among other things features a Hangout functionality to start group video chats with multiple contacts at once. TechCrunch, however, seems to believe that Project Spartan, an HTML5-based development and distribution platform that’s being built with Mobile Safari for iOS in mind, won’t be part of the announcements today, which may or may not also include the long-awaited official iPad app, supposedly nearing a public release.

Revealed by TechCrunch three weeks ago, Spartan is a new HTML5 platform that will allow developers to plug into Facebook’s API and social graph from a mobile web browser, enabling them to create games based on HTML5 rather than Flash, and other kinds of applications that won’t need any sort of approval from Apple as they’ll be available directly in Safari. Project Spartan was initially described as Facebook’s intention to take on Apple and its dominance on mobile app distribution by launching an “open” platform based on web standards, though after the leaks the company issued a series of PR statements to various blogs saying Facebook’s interest in open web technologies was nothing new and, allegedly, telling the interested developers (known as Spartans) that the project was highly confidential but not aimed at going after Apple.

Today, MG Siegler at TechCrunch shares more details and the first screenshots of Project Spartan, running inside Mobile Safari on an iPhone. The images show a mobile-optimized webpage that resembles Facebook’s regular mobile website, only with the addition of games, apps, and notifications. Farmville can be spotted in a screenshot, and indeed Zynga is rumored to be one of the key partners of Project Spartan in order to port the insanely popular Farmville (and other Facebook games) from Flash to HTML5. According to the website, Facebook is pushing initial partners to have their apps set up and working by July 15, with an announcement to be made by then and August 1. One of the peculiarities of Project Spartan, TechCrunch reports, is that developers will be capable of targeting the iPhone and iPad browsers with apps connected to Facebook, but hosted on their servers.

The blue bar along the top is referred to as “chrome” (yes, it shares a name with a Google product). Developers say it’s the glue that binds all the different mobile sites together. That’s one key — these HTML5 apps are said to reside elsewhere, not on Facebook’s own servers (at least right now). So instead they have to make external calls to pull in the Facebook “chrome” to make the apps look like proper Facebook apps.

Head over at TechCrunch for the full report on Project Spartan and the details behind Facebook’s initiative to deploy apps and services for iOS devices, without going through the App Store. Admittedly, if the rumors are true, Facebook has a chance to establish itself as a relevant player in the mobile app distribution game: whilst native apps and games for iOS devices need Apple’s approval to go past the App Store gates, Facebook could allow existing developers of games and applications to easily port their Flash experiences (used by millions of users on the desktop) to iOS Safari using web standards falling under the huge HTML5 umbrella. Supposedly, Apple is also giving some kind of help to Facebook to launch this new platform, which wouldn’t come as a total surprise considering Apple’s best interest to improve the way web apps work on iOS, as opposed to Adobe’s Flash technology they don’t support. Then again, Project Spartan apps could be both embedded within Facebook’s iPhone app (and upcoming iPad app) and accessed through Safari – currently, the Facebook iPhone app is a mix of native code and web views that enable the company to push changes to the interface without asking for Apple’s approval.