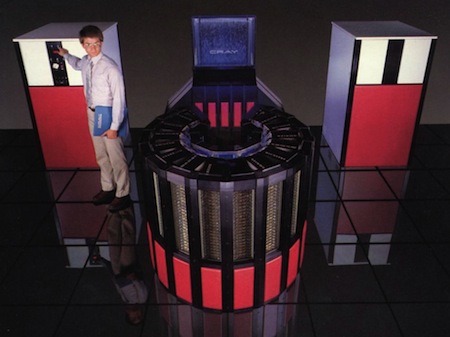 Jack Dongarra, researcher at Oak Ridge National Laboratory, conducted a study to determine the position of the iPad in the list of the world’s 500 fastest computers in history. Using the Linpack computing benchmark, “a linear algebra test that measures  the mathematical capabilities of computers”, he came to the conclusion that the iPad 2 would be the perfect rival for the four-processor version of the Cray 2 supercomputer, an eight-processor machine that was the world’s fastest computer in 1985.

To date, the researchers have run the test on only one of the iPad microprocessor’s two processing cores. When they finish their project, though, Dr. Dongarra estimates that the iPad 2 will have a Linpack benchmark of between 1.5 and 1.65 gigaflops (billions of floating-point, or mathematical, operations per second). That would have insured that the iPad 2 could have stayed on the list of the world’s fastest supercomputers through 1994.

The Cray 2 was an unusual computer even by the standards of its designer, Seymour Cray. About the size of a large washing machine, it was cooled by immersion in a liquid called Flourinert that had been developed by 3M, and that was occasionally used as a human blood substitute during surgery.

The obvious difference is that, whilst the Cray 2 required to be placed in a large room, the iPad 2 fits in your hands, it’s touch-based and runs thousands of different apps. To put things in context, Steve Jobs also left Apple in 1985.