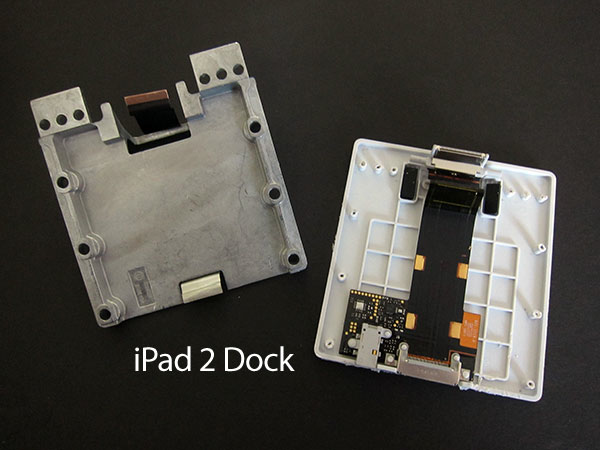 First, if you’ve ever wondered how Apple gets those docks to feel substantial, the answer’s not tiny sandbags. Each version of the Dock actually has a huge, heavy metal plate inside molded with a “Zinc-3” legend on its undercarriage.

That explains why the iPad 2 Dock is so heavy. iLounge also goes as far to show the comparisons between the first iPad dock with newer model. What’s interesting is that the dock appears as one solid piece from the outside, but is divided into an outer shell and a base on which the components sit. It’s an interesting design, and one that competitors probably wouldn’t mimic: they wouldn’t hide the fact that their docks are just cheap plastic or are built & glued in multiple pieces, whereas Apple goes out of their way to make their products presentable. Even in accessories, Apple does a substantial job paying attention to solid unibody designs. TUAW writes:

In terms of actual computer hardware, as you might guess, there’s not a lot – just a few chips for functionality like authentication and of course iPad synching. In fact, the iPad 2 dock, says iLounge, has more empty space than the first dock, even though the actual design is a little more compact than before.

Also of note: the weight shown in the pictures looks heavier than it feels. If I was to perceive how the iPad 2 Dock felt by looking at the picture above, I would think it’d be as heavy as the iPad 2 itself.