On The Benefit Of iOS 6 Maps 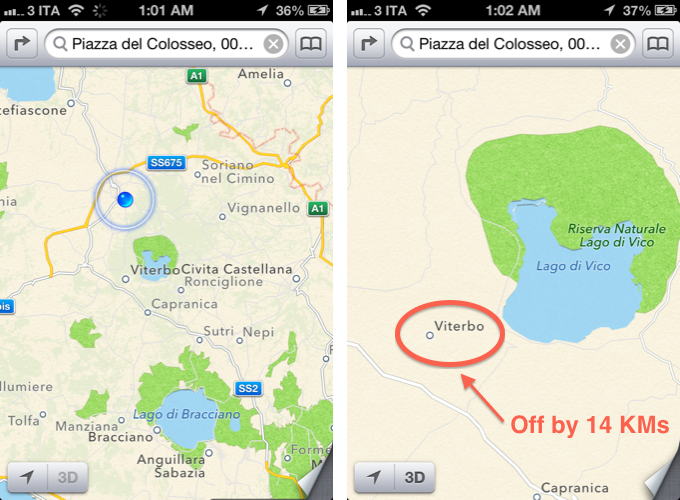 Anil Dash, writing about his experiences with Apple’s Maps on iOS 6:

Here in Manhattan, where I live, basic search by building names is profoundly degraded in Apple’s maps search. “Bloomberg” doesn’t find the Bloomberg Tower; on Google Maps it’s the first result. Searching for its address “731 Lexington Avenue” yields that address on Lexington Avenue in Brooklyn. It’s fine to think that perhaps I wanted the address in Bed-Stuy, but even appending “NY, NY” or “Manhattan, NY” still yields the Brooklyn address. Google maps has none of these comprehension issues. I understand this is due to Apple partnering with Tom Tom, whose maps are considered to be lower in quality than other players like Nokia, but I’m not informed enough to say with certainty whether that’s the case.

In response to our iOS 6 coverage (my thoughts on iOS 6 here, Cody’s overview of Maps here) TomTom sent us the following statement:

TomTom supplies maps and related content to the majority of handheld players, including RIM, HTC, Samsung, AOL (MapQuest Mobile), Apple and, yes, Google (for the areas where they don’t make their own maps).

Our maps are used by businesses around the world, which have standards for coverage, detail, quality and safety.

When people use a map, their experience is determined by two things. Firstly, the underlying content, notably the maps. This is what TomTom is currently supplying the mobile industry with and it is what gives their maps the best foundation. Secondly, user experience is determined by adding additional features to the map application, such as visual imagery. This is typically defined and created by the handset manufacturers and third party software providers on the basis of their own vision and needs.

If I understand this correctly, TomTom is essentially implying that, because user experience is defined by “additional features” (such as Apple’s custom map tiles, I assume), then issues with the user experience are also related to the choices made by “the handset manufacturer”.

I do believe, however, that the problems mentioned by Dash (poor recognition of POIs, questionable detection of local addresses) – the same ones I mentioned in my piece – aren’t related to Apple’s “vision” and “visual imagery”. Here’s Business Insider yesterday, reporting about an interview with Waze CEO Noam Bardin (Waze is also listed in Maps’ copyright notices):

But Bardin says that Apple has taken a huge bet by partnering with TomTom, a maker of traditional GPS hardware that’s morphing into a mapping-data provider. Both TomTom and Waze are listed in Apple’s copyright notice as providers of map data. But Bardin’s observations suggest that Apple is relying predominantly on TomTom.

“Apple went out and partnered with the weakest player,” Bardin says. “They’re now coming out with the lowest, weakest data set and they’re competing against Google, which has the highest data set.

Ultimately, it simply comes down to having a good experience – no matter who puts in the data. But it’ll be interesting to see how fast Apple will manage to iterate on its new Maps.

Update: After asking whether issues with the visualization of maps were related to Apple’s imagery, TomTom provided us with an additional statement:

Yes, we did not develop the map application. Rather, we only provide the data to build a car-centric map foundation. Everything thing on top of that - routing, visualization, etc. - is determined by the supplier.