‘I Am Number Four’ Director On Hollywood & iPads 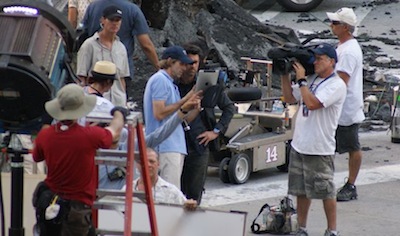 (Above: Michael Bay using his iPad on the set of ‘Transformers’)

Film director DJ Caruso describes his experience of using the iPad as a productivity tool while shooting ‘I Am Number Four’:

I got it, I don’t want to say as a toy, but then I realized about a week into prep that my storyboards were coming on it, my previs was on it, my script was on it, I don’t carry my script anymore. I started getting emails from two of my storyboard artists who work in Los Angeles and I have this application where I can mark up the boards – I’m a terrible drawer – and I can mark up the boards and send them back. It just became this amazing production tool.

There’s more than a director discovering this new tablet computer as a useful gadget, though. In fact, DJ Caruso says almost everyone at Hollywood from assistants to actors to directors now has an iPad, and not just to play Angry Birds during breaks. He even tells the story of when he got into an email conversation with Spielberg about the apps they had installed and used for work purposes.

The coolest part, however, is about the supernatural powers of the main character of his movie being controlled by a custom-made iPad app:

Pettyfer’s character John Smith, an alien, discovers during the film he has several supernatural powers. One of those powers is that he can control light through his hands. During filming, Alex wore a flashlight-like contraption wired up through his jacket and it was activated… by an iPad off screen.

It turns out, some people do create content on their iPads. Looks like Hollywood is indeed hooked on iPads. [via TUAW]