The Facebook app for iOS was updated today to version 5.4, which includes the possibility to record and upload videos within the app, as well as sending voice recordings to friends.

The UI for sending voice recordings in private messages is interesting. You can tap the “+” button in a conversation to bring up a menu to attach a photo, snap a new one, send emoji, or create a voice recording. To create a recording, you have to “touch and hold” to talk; an audio file will be sent once you release the button, and it can be played inline in a conversation. It’s a very simple interaction. I don’t know if this is new in this version, but the “+” button rotates to an “x” when tapped – just like the “+” button in the OS X Dashboard used to rotate when clicked. 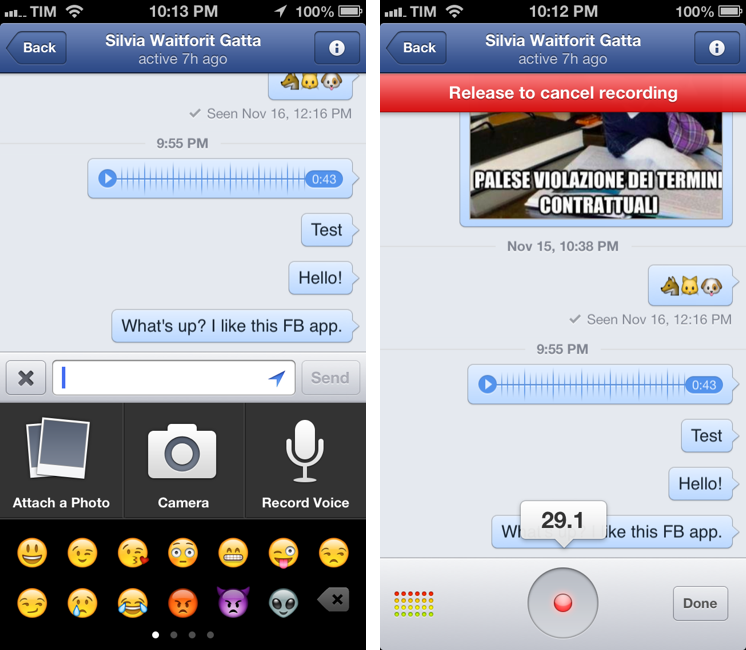 Because the file gets sent after the user lifts the finger off the screen, Facebook implemented its own way to cancel the action: you can swipe to the side while holding to cancel a recording in progress. Doing so will reveal a red “cancel bar” at the top of the screen as confirmation. Recordings can also be played inline on the Facebook website.

The improved Nearby tab is also well designed. With an embedded MapKit view, the Nearby section lets you check out “favorite places” in your area. Like Apple’s Maps app, Nearby has floating controls at the bottom to pinpoint your current location and hide/view a list of results. At the top, there’s a large button to bring up a search for places that includes categories like Coffee and Hotels, as well as your “History”. I like how moving the map around brings up delimiters to “Search This Area”.