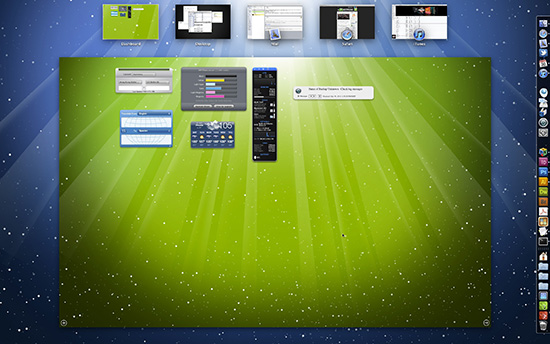 As soon as I installed Mac OS X Lion I began playing around with all the new features. Naturally, Mission Control and Dashboard were two of the first things I tried. I immediately hated the image backgrounds Apple chose to use and began searching for a way to alter them. It didn’t take long, and it’s quite simple to do.

The linen texture is unpopular with a lots of people, often being designated as, “The new pinstripes”. Personally I like the linen texture as it provides nice contrast against bright and floating desktops and apps, but I’m not sure why it didn’t carry over to the dashboard. The dashboard, featuring a lego-like texture, oddly stands on its own from the rest of OS X as some kind of ugly stepchild. It’s bad enough the dashboard still retains that metallic widget-bar, and Apple reinforces its distinctness from the system with a background that reminds me of diamond-plate — it’s simply unappealing. In the meantime, you have a choice in whether you want to look at it (or linen) through a nine step process that allows you to swap out those gross backgrounds for bubbles, stiching, denim, or whatever floats your boat.