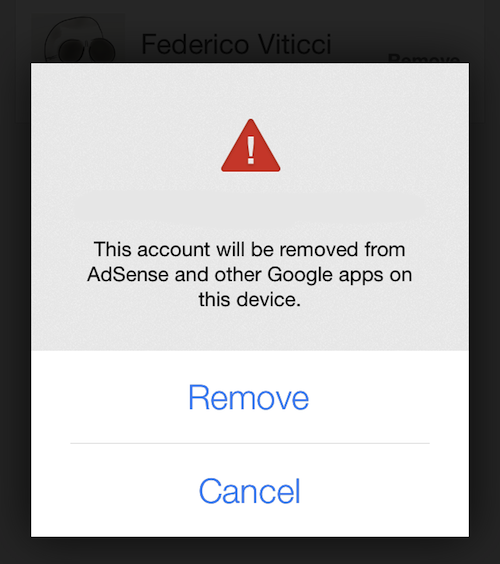 Alex Chitu, reporting on a feature that I also noticed after YouTube’s 2.0 update:

If you enter the credentials of a Google account in the YouTube app and then open the AdSense app, you’ll find the new account and you can sign in without entering the password. If you remove an account, it will be removed from the other Google apps that support this feature. I assume that most Google apps for iOS will be updated to use this brilliant feature.

If you’ve signed in with another Google app on your iOS device, you may see this account listed.

Google’s explanation isn’t clear; the shared account option isn’t mentioned in the documentation for Gmail and Chrome. Upon signing out from the YouTube app, an alert dialog reads:

To sign in again, just select one of your Google accounts saved on this device. You will not be required to enter your password. To remove a saved account, tap “Sign In” > “Manage” > “Remove”.

It’ll be interesting to see if and when shared accounts will be integrated with Google’s other iOS apps. In the past few months, Google enhanced the inter-app communication capabilities of Gmail, Maps, Drive, and Chrome with the ability to open links in other apps, completely foregoing the need to launch Apple apps like Safari, Maps, or Mail.

Furthermore, Google is also providing an SDK for developers to add this functionality to their apps (for web links), showcasing examples of third-party apps that support Chrome. While Google apps won’t have the same kind of system integration that they have on Android, the combination of URL callbacks and shared accounts could help the creation of a “Google app ecosystem” on iOS.