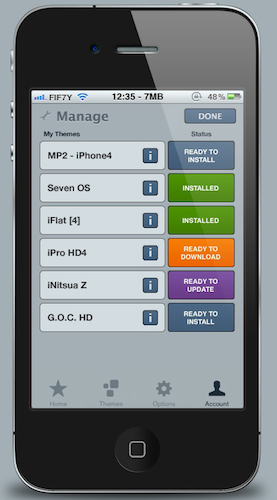 Right after a major improvement to the Themes section on Cydia, here comes Theme It, a new store for themes iOS users can install on their jailbroken devices. Theme It offers a curated collection of premium, paid themes from designers who have created full replacement for the standard graphic elements on iOS. If you’re familiar with Cydia and Winterboard – the tool to apply themes to the iPhone – starting to use Theme It shouldn’t be really difficult. The store now only has paid themes, and the developers promise free ones will be added soon. To use the store, an account is required, and the app must be downloaded either manually or installed through a dedicated Cydia repository.

A full list of currently available themes can be viewed here. Users can browse themes either on the app or the website, they can vote themes and read through the descriptions provided by the creator. The app’s design looks clean and elegant, although we don’t know the technical details of the app – namely, whether or not it uses the same Winterboard system to apply themes to iOS.

There’s also some controversy in the launch of Theme It. Apparently, Cydia’s owner and main developer Jay Freeman asked the Theme It folks to “back down” and not launch the app, claiming “competition is bad”. After the break, you’ll find the response from Theme It’s developers (courtesy of ReadWriteWeb) and a promotional video for the new Store.

Note to all iDevice Jailbreakers and people interested in Theme it:

Well as it was to be expected Saurik/Jay Freeman (maker of Cydia) doesn’t seem to appreciate our venue in “his” community. He wrote me an email, asking us to ‘back-down’ and stop our much awaited project hiding behind the fact that competition is bad… Sure competition isn’t good to someone trying to keep his monopoly and have the ability to decide how everything should or should not evolve. But we’re all aware that competition is a great thing for the end user and everyone else for that matter, it forces the different parties to do better all the time for the real good of the community. Funny enough, he suddenly seems to have become very “available” since the announcement of Theme it went public ; ) getting in contact with the different repositories, theme creators, etc.

But “back-stabbing” is the main intention here, making sure all the people getting involved with us will turn their backs on us (I’m forced to admit that they don’t really have much choice since he’s currently the only one pulling all the strings) For instance we “mysteriously lost” our partner repository (that had signed a partnership agreement with us) and i’ve heard that he’s even “taking the time” to contact different theme creators directly as well to try and make sure they don’t follow us in this adventure… how low is that !? This clearly shows one thing; he feels quite threatened of what we’re coming out with, he doesn’t want to loose money and potentially more… his monopoly.

Now, we just wanted to let everyone know that Theme it is being released in January and that we’ll be glad to count you in. There is no ‘sides to choose’ here, we just want to offer a different solution to users, theme creators and everyone else interested. Keep in mind that Theme it is currently oriented to deal with themes because that’s where we noticed there was a real need to do something but the architecture is fully compatible to have let’s say : App it come along later for software developers, etc…

Obviously we’ll be looking for the best way to get distributed (repository and/or jailbreak utilities) now that most doors have been closed thanks to Saurik’s requests/pressure, so if you’re interested feel free to get in touch with us via our website, twitter (@themeit_app) or by mail at info@themeitapp.com

This message has two main purposes: One is to let everyone know Saurik/Jay Freeman’s ways and how he keeps trying to block any competition to keep a global hold on “the community”. Two is to let people know that we hate to be dictated what we should or should not do and that his low-ways of doing can only motivate us even more to make a great, fresh, new solution for everyone to enjoy.

I hope you’ll understand that this is REALLY for the best of “the community” and it’s time users, theme creators and repositories have other options to choose from.