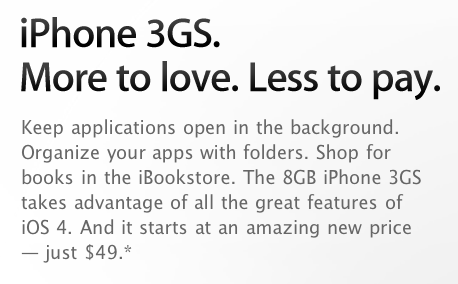 Last week, we reported the iPhone 3GS was set to be available at $49 at AT&T with a two-year contract. Earlier today, Apple quietly updated its website to include the new price, which applies to the 8 GB model of the older model. The same 8 GB model was previously available at $99; now Apple is matching AT&T’s price, without any major announcement or press release. A two-year contract with AT&T is still required, but users can now purchase the device directly from Apple.

The iPhone 3GS at $49 is available on the Apple online store, or Apple retail stores. The same deal should be available at any AT&T retailer, as long as you subscribe a two year contract. The iPhone 3GS at less than 50 bucks is a very good deal if you don’t care about the iPhone’s new cameras and Retina Display, as the 3GS can run the same operating system with the same features such as multitasking, folders and AirPlay.

Come January next year, we wonder if Apple will offer a $50 iPhone 4 with AT&T or, well, Verizon as well. An iPhone 4 at that price would be a great deal.