We’ve heard a lot of stories about the iPad being used in many original and innovative ways. So many of them, actually, that it’s not easy to remember all the photos, videos and stories detailing the iPad as a revolutionary device used for something else than it was originally meant to – a portable computer.

Today we take the iPad-related stories a step further with this video where photographer and filmmaker Jesse Rosten (hey, he’s the same guy behind iPad + Velcro, the video that even got featured by Apple) used an array of 9 iPads as a light source for a model photoshoot. With a light background at full brightness, the iPads managed to generate enough light to let Jesse shoot the great pictures you can see in the video below. 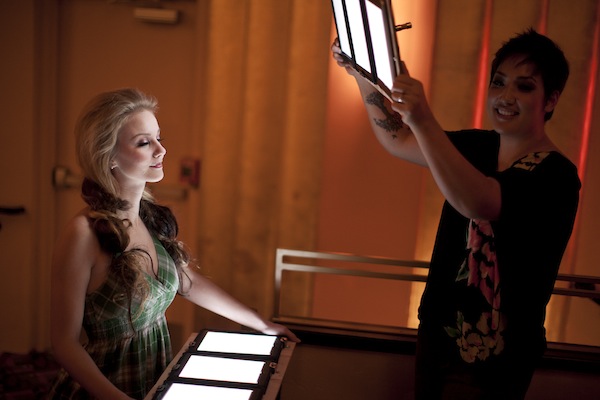 On his blog, he writes:

Eventually, it dawned on me that, given the right context, the iPad screen is actually pretty bright. I know that for a fact because I measured it with my light meter (1/60, f1.4 at ISO800 from about 1.5 feet). You know once the light meter has come out of the bag, there’s no going back. Naturally, we needed to do a photoshoot using iPads as the light source.

Luckily, I have friends who are very generous with their time and electronics and was able to scrounge up nine iPads. I mounted them onto plywood using some cheap hardware store brackets. This gave me three lights consisting of three iPads each. The light from an iPad is quite soft and diffuse. This makes the light fall-off steep. Adding more iPads didn’t translate to more brightness, but did mean we could light a larger area. Since the ‘Pads would need to be used somewhat close to the subject to get enough exposure, a simple, portrait style shoot seemed like the best option.

Sure, it’s totally unpractical and expensive – you can get a light bulb and get more light that a stack of iPads. But as Jesse says, this is just an experiment to see whether one can be creative with the things he’s got, and he happened to have some iPads laying around.