So, big news tonight folks: Spirit, the universal jailbreak tool we’ve all been waiting for, it’s out. You can go check it out here. I’ve just managed to jailbreak my iPad (my iPhone is already jailbroken and stuck at 3.1.2) and the process has been very fast and easy. Check the tutorial after the break, together with our impressions about the first apps we’ve installed from Cydia.

Spirit is very simple, and it requires less than a minute to jailbreak an iPad. Go to Spirit’s official website and download the .zip archive, extract it and fire up Spirit.app. It will ask you to plug a device in.

Plug your iPad in, but back it up with iTunes first. It’s very recommended to do so because the jailbreak apps for the iPad are still very buggy and unstable, so it’s better if you save everything before going further. Now the magic comes in: click on the jailbreak button and you’re done!

The iPad will restart, show you a “space” screen and go back to the home screen. A Cydia icon will be there, but don’t freak out if some icons will be rearranged: I guess it’s a bug. 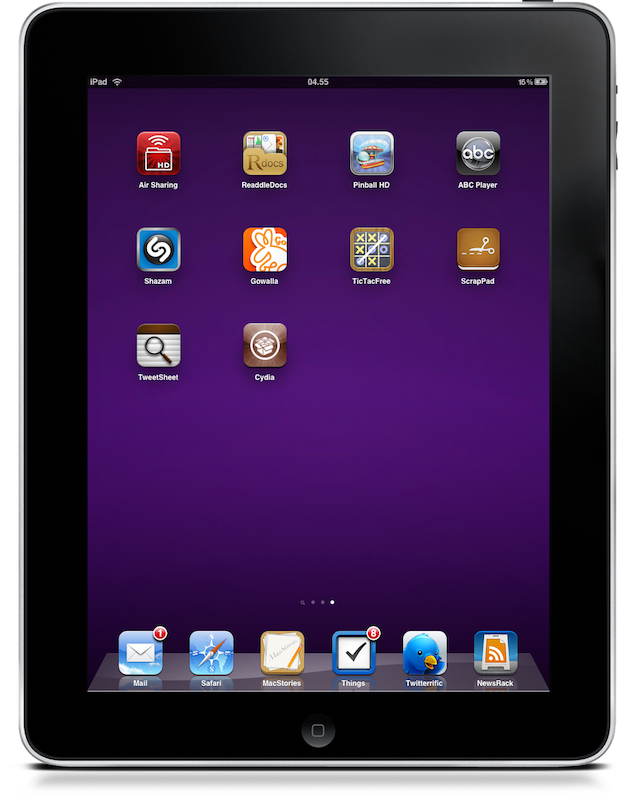 So, you have Cydia now. Open it, choose “Developers, no filters” from the popmenu and let it refresh and find if there are updates available: there probably will be some, so update. The iPad will respring again, it’s perfectly normal. Now go back to Cydia, and browse between the different sections to install some apps and tweaks. 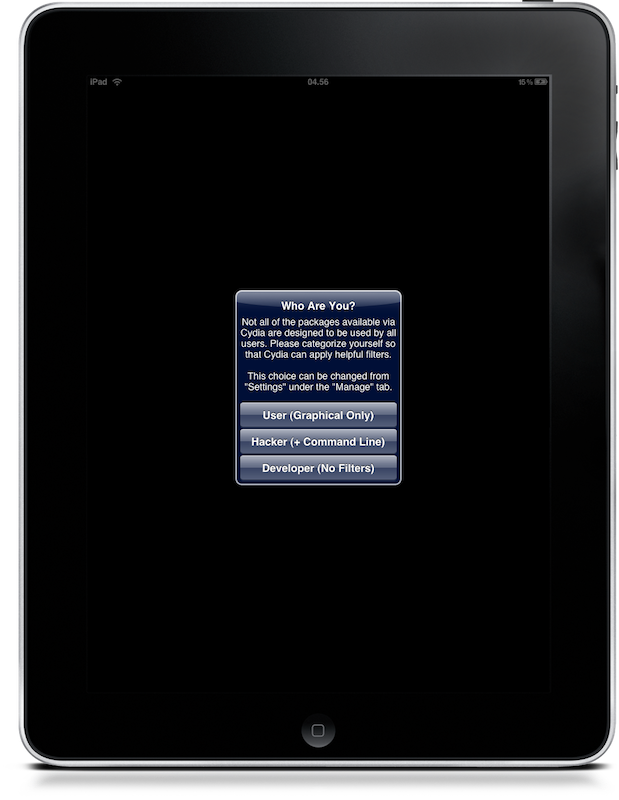 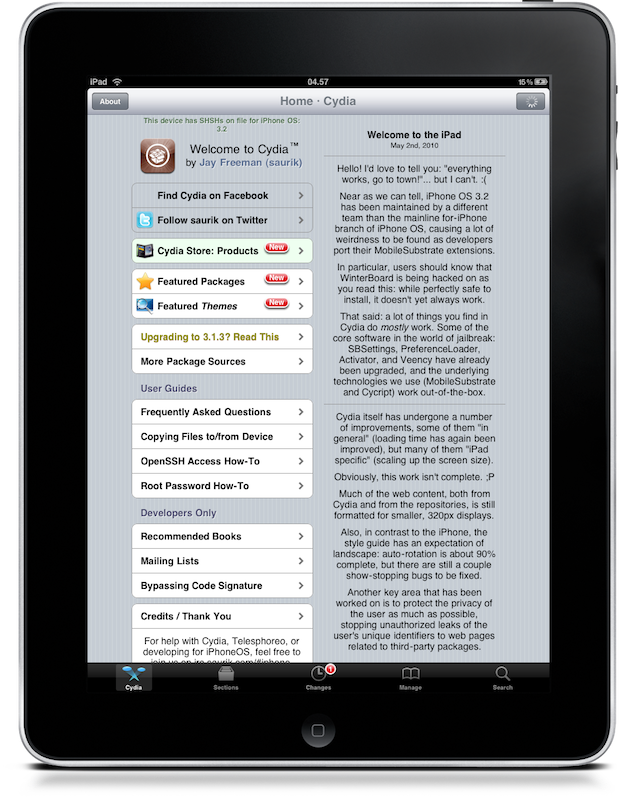 Well, first of all: Backgrounder works great, ProSwitcher doesn’t. So, you can have multitasking but without the GUI for that, and I know that the developer is working on it. I mean, ProSwitcher appears on screen, but I haven’t managed to switch between “cards” at all. Anyway, you can stream Pandora in the background with Backgrounder: I’m writing this post with Modest Mouse playing Float on. Also, Activator works perfectly: I guess it’s the only 100% iPad compatible Cydia app by now.

Cydia hasn’t been updated for the iPad larger screen yet, except for the home screen which contains some advices from Saurik about which apps work, and which don’t. SBSettings works, it’s themable but it doesn’t exactly support landscape mode. The iPad resprings and reboots just fine with it, and toggles work as well. Veency is compatible, and you can check out the screenshot below. It’s also pretty fast. I heard on Twitter that OpenSSH should be working fine too, so I guess you can install it and start browsing your iPad’s file system. 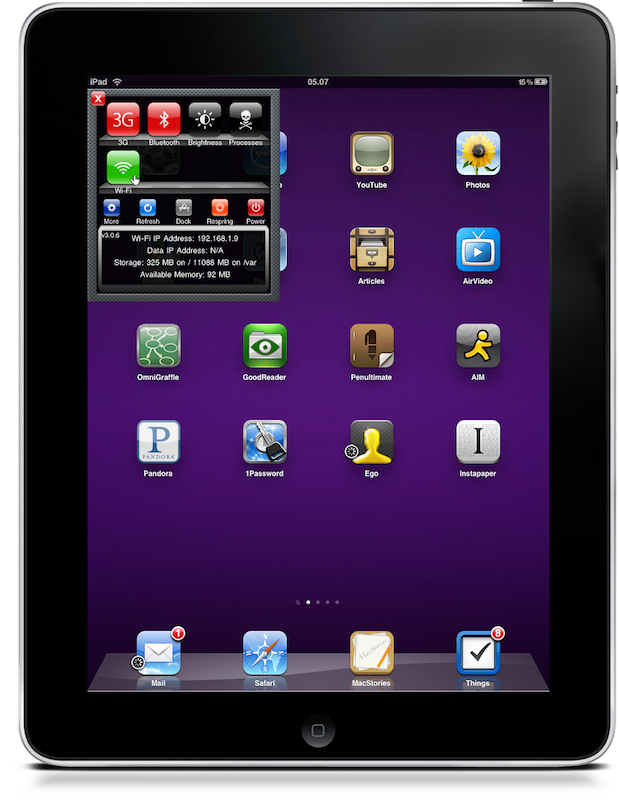 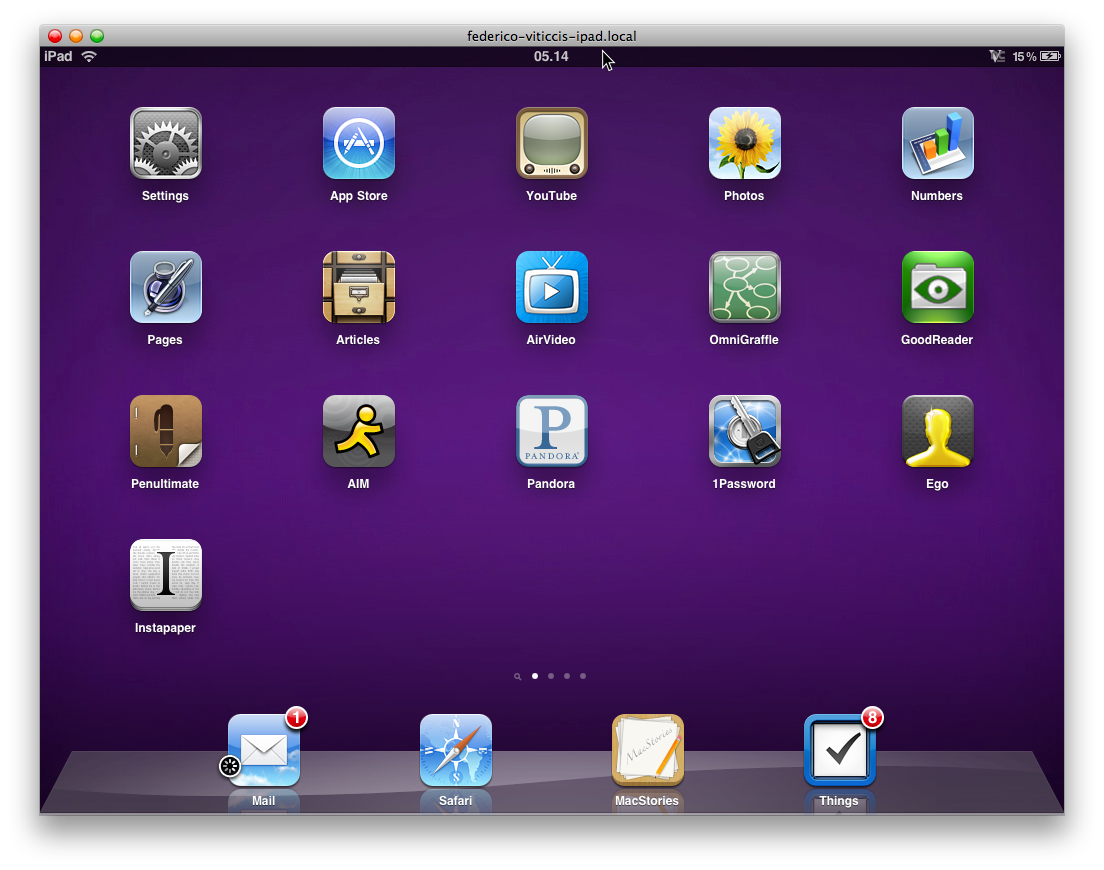 Don’t install Winterboard yet, Saurik is working on it and it should be ready soon.  The iPad has a very different structure from the iPhone, so that’s why WB needs more time to be completed. MobileSubstrate works out of the box, but I don’t suggest you installing every app you can think of, hold on for compatibility updates and be sure to come back to this post because we’ll be updating it with all the well known apps that work.

Even if it’s still buggy and far from perfection, Spirit for iPad works and so does Cydia. Multitasking is now possible.

Latest SBSettings beta fixes the landscape issues and puts the window back in the middle of the screen.

To download the beta, you have to add BigBoss’s beta repo: http://thebigboss.org/betarepo/  (seems to be down at the moment)