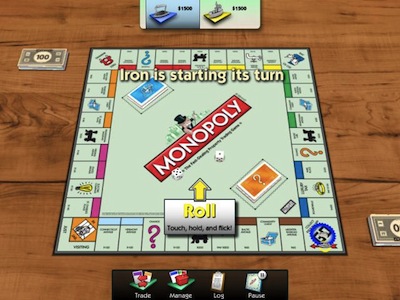 My closest friends are addicted to two things in this world: Monopoly and my iPad. Either they play the board game, or they grab my beloved tablet to play Fruit Ninja HD. I can tell you this happens every week, on a regular basis, and the only advantage of the iPad is that the battery eventually dies. Otherwise, they would play all night trying to break my girlfriend’s 912 points record at Fruit Ninja’s arcade mode. They’re currently stuck somewhere around 810.

The problem is, anyway, those two addictions will soon merge into one because of Electronic Arts, which is bringing Monopoly to the iPad. The actual Monopoly, the real one – in fact, the game will be released as “Monopoly Classic for iPad” later this month. Just before Christmas. Oh boy.

As TouchArcade reports, the iPad’s bigger screen will offer a proper board game experience (there are two versions of Monopoly out on the iPhone, but they’re not tally that great) and will allow for on-device multiplayer with 3 other people. Indeed, this is going to be the end for my iPad during the holidays. What’s cool is that when in multiplayer mode, UI elements will automatically turn themselves towards each player – no manual iPad orientation adjustment required! The UI will turn upside down and sideways on its own. Sounds great.

Monopoly for iPad will also feature an improved AI and the possibility to check on detailed stats in-game. You’ll be able to play over WiFi or Bluetooth with other devices in the same local network, and the app will support interaction with the iPhone versions as well.